The removal of the Penang Hill Railway 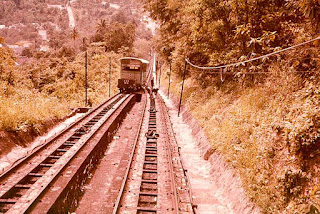 I wrote recently about the Penang Hill Railway and how I loved travelling on it back in the 1960s. Today, I was reading a blog from ygblog4 and read that the train has now been dismantled.
After 87 years of use, both the train and track have become so worn, that it regularly breaks down. I find it amazing that the train that we travelled on all that time ago is the same one that was still in service until very recently.
The good news is that the train isn't disappearing altogether and hopefully, later in the year, it will be replaced with larger, faster carriages, complete with air-conditioning.
Here's a little film that my dad shot of the railway back in 1966. It's not a very long film and, if you're a regular follower of this blog, you've probably seen it as part of a longer home movie but it's worth seeing again just for the great views. I wonder if Penang is still so green and lush today? Hopefully, I'll return to Penang one day and travel on the new funicular and see all those wonderful sights again.
Posted by derek tait at 11:22 No comments:

Here's another short film of our trip to Singapore in 1990. The building covered in bamboo is the New 7th Storey Hotel and we stayed there when we landed in Singapore. It actually looks worse in the film than I remember it! I think that the hotel was in Rochor Road and has only recently been knocked down. When the taxi driver dropped us off, he said, 'No good!'. We stayed there anyway, because we were on abudget. We appeared to be their only guests and they'd left a pair of flip flops out for us in two completely different sizes! The cockroaches woke us up in the morning and we went to have breakfast in the restaurant on the top floor. Great views but it looked nothing like their leaflet which I've still got. I'll scan it sometime and put it on here. I remember that there was a very old man operating the lift. Of course, many Naval families stayed at the 7th Storey Hotel in the 1960s but I think that it had gone downhill a lot since then.

The film also features views of the streets, Chinatown, the Merlion, Singapore River, the Christmas lights in Orchard Road, the remaining sampans on the river and right at the end, Singapore Zoo. It's worth sticking with the film just to see the swimming polar bear!
After we left the 7th Storey Hotel, we stayed at the much more plush YMCA on Orchard Road. It was better than any posh hotel I've stayed in but you could only stay there for 3 days so we ended up in the Supreme, which was a step up from the 7th Storey Hotel but not much of one. The wiring seemed dodgy and the air condition was jammed on which made it freezing cold in the rooms. The man on the reception told us if we wanted it warmer, to just open the window! When we left, the taxi driver said, 'Don't stay there - big fire!'.
I'd love to go again some day. I bet it's all changed and even many of the places in this small film will now be gone.
Posted by derek tait at 09:23 No comments:

Here's a short movie I shot at Tiger Balm Gardens in 1990. Sorry it's a bit dark, my video camera had travelled all over Australia and had been dropped so the quality isn't as good as it should be!

The park had changed quite a bit since the 1960s. The gorilla statues had been removed and a huge dragon ride had been put in their place. It was great to see it all again but it wasn't quite the same as I'd remembered it. A lot of the land in front of the park had been reclaimed and built on so it felt like it was in a different location.
Tiger Balm Gardens has been knocked around a few times since I last saw it and I'm not sure if it's even still there today or if it's been moved somewhere else. I know that the dragon ride was later demolished. I've seen photos of it on the internet over the years but I'm never sure how recent they all are.
Anyway, the Tiger Balm Gardens that I remember fondly will always be the one in the 1960s, it's a pity that it's not been looked after over the years.
Posted by derek tait at 12:00 No comments:

The disappearance of the city's snake charmers 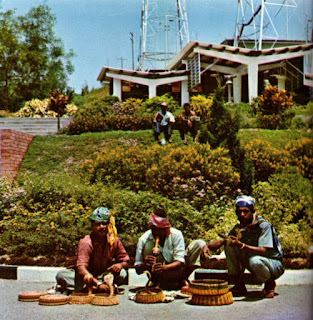 Back in the 1960s, I loved seeing all the snake charmers and magicians who performed their act at the Padang and in front of Raffles Hotel in Singapore. The photo shows three snake charmers, complete with flutes, baskets and cobras, at Mount Faber. When I returned in 1990, of course, they were all gone as was most of the old Singapore that I remembered. They were mentioned in a Singapore newspaper in 1978, ten years after we'd left and although, it sounded like the practice would continue, they eventually disappeared from the streets of Singapore completely. Snake charmers : a dying breed. 7th February 1978. Professional snake charmers were fast disappearing, although several who were interviewed dismissed the possibility. Their children, they said, were trained to folow in their footsteps as a matter of tradition, and even if they did chose other careers, they could always return to snake charming. There were an estimated 40 Indian snake charmers left on the island. They worked seperately, but were part of a close community that pooled earnings and divided the total sum equally.
Posted by derek tait at 04:21 No comments:

The End of Bugis Street 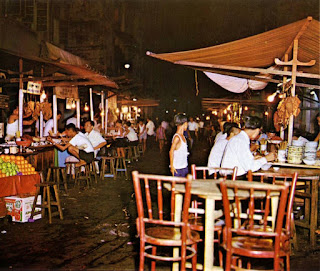 I've written before about Bugis Street, famous for its transvestites and bars. Many of you will probably wonder whatever happened to it. Here's a newspaper story from 1980 that reveals all:
Transvestites told to leave Bugis Street
22nd August 1980
The star attraction of Bugis Street, its gaudily dressed transvestites, were told to leave the popular haunt and go back to Lorong 6 in Geylang or risk arrest. Some of them had been involved in fights, thefts and pick-pocketing.
Enterprising transvestites and photographers did a brisk business taking 'souvenir' photos posed with visitors to Bugis Street.
Both visitors and stallholders felt that the food would still attract tourists. In March, to 'tidy the place and reduce congestion', 60 hawkers located along the first 30 metres at each end of the street were moved to Hylam Street.
This was the beginning of the end. Continual 'tidying up' of the streets and major redevelopment saw the end of Bugis Street as many visitors had known it in previous years. Shopping malls and the underground MRT disrupted the area and a memorable part of Singapore was lost forever.
Posted by derek tait at 13:11 No comments: 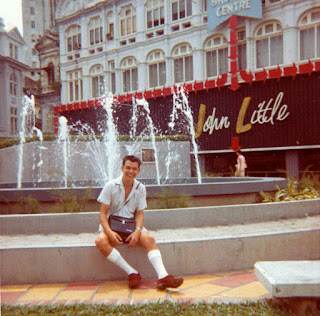 Does anyone remember Robinsons which I think was near Raffles Place? We all used to shop there and I think that it was very popular with British families. I remember at Christmas, it would be decorated with a giant hoarding showing Father Christmas in his sleigh being pulled by several reindeer. Underneath, in large letters, it said, 'Merry Christmas!' The colour photos shown here were taken by my parents' friends, George and Kit Holden. The first photo shows Robinsons store and the next photo shows the nearby John Little. I 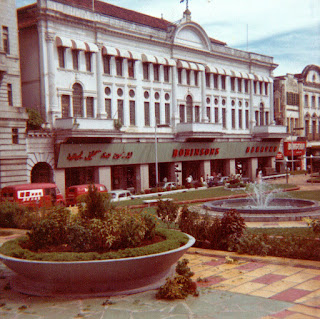 notice that George has his mozzie repellent socks on! Those things loved nipping your legs. I don't think that there are any mozzies left in Singapore nowadays!
Unfortunately, Robinsons store met with an unhappy ending and the story was carried in the local paper :
Robinson's Inferno kills nine.
21st November 1972.
A pregnant woman was among nine people when a fire razed Robinsons department store in Raffles Place. It was one of the worst fires in Singapore's history.
The fire which started at 9.55am, was believed to have been caused by a short circuit on the first floor of the four-storey building. By the time it was brought under control at 12,20pm, the store, which had occupied the building for decades, had been razed to the ground. Also destroyed were millions of dollars' worth of consumer goods waiting for Christmas shoppers.
The nine who died were mainly store employees, including pregnant salesgirl, Ainon Mohamed Tahir, 21.
Robinsons peon Ibrahim Shahul, who managed to escape, said he smelt burning rubber just before thick smoke and flames came roaring in. 'Then the lights went out. I heard someone shouting in the dark that the lift had stoped and that an expectant mother, a tourist and three others were trapped in it,' he said.
As the fire raged, businesses in Raffles Place were widely affected. The Stock Exchange in Clifford House, Collyer Quay, had to stop trading shortly after 11am. Police Reserve Unit troops and Criminal Investigation Department officers were called into control the crown and keep looters out of the area.Losses were estimated at around $14 million.
After the fire, Robinsons relocated to Orchard Road and today can be found at The Centrepoint Shopping Centre where they moved to in 1983.The Robinson Group nowadays manage John Little, Marks and Spencer, Principles, Trucco, Coast, River Island and Fat Face. It seems a long way from the Department Store in Raffles Place that we all used to love visiting.
Posted by derek tait at 09:07 3 comments: 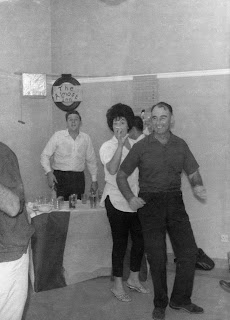 This photo shows a party at the home of my parents friends, Bette and Les Sharpe. The bar is called, 'The Almost Inn' and that's my dad in the background. Look at that crazy dancing!
Whenever I think of Les, I'm always reminded of the time when Les nailed a Catherine Wheel to a post in his garden at Jalan Dato Sulaiman, in about 1966, and once it was lit, it flew off and went up one of the legs of his shorts! Don't worry, he didn't have any lasting injuries!
As it's Chinese New Year, I thought I would mention a bit about firecrackers. I mentioned recently that when we first arrived at Johore Bahru in 1965, we were woken up by loud noises in the middle of the night. I think my parents were worried and thought that the noises might be gunfire connected with Indonesian insurgents. However, it turned out to be Mr Lee, across the way, letting off rows of firecrackers. I suppose it must have been Chinese New Year at the time and was probably about February as we had just moved in, in the January before.
I loved all the fireworks and there were many displays at the Naval Base especially at Chinese New Year and Christmas.
The film below shows a firework display in Singapore in the 1960s. It would have been quite spectacular then and much better than any display that you would have seen back in England at the time.
Firecrackers were finally banned in 1972 and an article in a Singapore paper covered the story: No more firecrackers at Chinese New Year 1st March 1972 Indescriminate firing of crackers during the Chinese New Year season each year had turned the age-old custom into such a public nuisance that the Government has decided to put a total stop to it. Minister of home affairs Wong Lin Ken said that the Government was forced to impose the ban because the public had not been cooperative in efforts to curb the firecracker menace. On 2nd June, Parliament passed the Dangerous Firework Bill. It became an offence for someone to possess or fire dangerous fireworks, such as firecrackers and rocket fireworks. Anyone found guilty could be fined up to $5,000 or jailed for up to two years, or both. To me, fireworks will always remind me of two events. One is Mr Lee letting off firecrackers on his balcony and the other is that Catherine Wheel flying up Les's shorts!
Posted by derek tait at 13:35 2 comments: