'Royal Navy wages, and those of the armed forces in general, were not very good pre 1965. We went to Singapore with the meagre proceeds of an old banger that we had to sell before we left. From the time we were lucky to have enough money left on a Monday to put 4 gallons of petrol in the car, which cost £1, we went to a point where we could save a bit and enjoy a comfortable lifestyle.
A married accompanied draft to a far eastern country was a dream come true. Apart from the thrill of living for 3 years in a fascinating country, it meant that I could be with my family continuously for that period. It also gave me a financial boost as I received 'overseas allowance' and several other local benefits.
None of us enjoyed the many inoculations, vaccinations etc but I suppose they were necessary. Once we were in Malaysia, we still had to have booster injections and we had to take salt tablets and anti-malaria tablets (Paludrine) regularly. 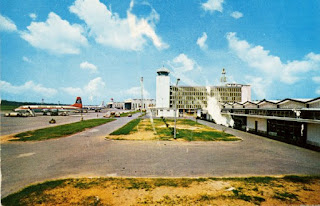 We arrived at Singapore airport as dawn was breaking with a pinkish-orange glow. Even at that time of day, the heat and humidity hit us. After formalities, we were transferred to the Straits View guest house in Johore Bahru where we stayed for several days. The local people, the food, the temperature and humidity, the different lifestyle were all a bit overpowering. My wife had a few tears and wished that she was back home. Looking back, I think that you needed at least a month to acclimatise and settle in. 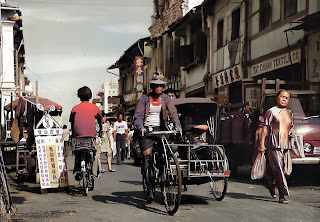 When I arrived in Singapore, I was met by an Australian who was also seconded to the Malaysian Navy. Bob Beaman drove me to the shore establishment, KD Malaya. He introduced me to the other members of our group - we were all Ordnance Artificers - and various other people. The Malaysian Navy at that time had a fleet of Fast Patrol Craft and they were soon to take delivery of an ex RN frigate. Our branch was a real multi-racial crew. There was Bob the Aussie, Poon the Singapore Chinese, Sharma the Indian, a Malaysian and three English - myself, Jim, Bill and a bit later on, Ron. Bob was a tall, good looking, down to earth, Aussie. When I say good looking, I mean good looking for an Aussie! He wasn't there for very long after I arrived. I remember him mainly for the amount that he ate. Breakfast to him was a huge steak with all the trimmings. This was at the time of the troubles up-country with Indonesian incursions with Malaysia. Bob volunteered to go to the 'war zone' for six months. By serving there, he qualified for an interest free mortgage when he returned home. 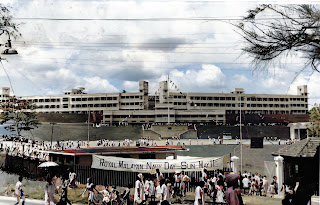 Sharma was seconded from the Indian Navy. He was different to the rest of us, I suppose, because of race, religion and personality. Whatever the reason, he was hard to get along with. After the ex RN Frigate arrived, one of us had to go to sea on her for a while. Nobody fancied this with the heat and conditions on board. After an elimination process, it was decided that only three of us were eligible because of various commitments - myself, Poon and Sharma. I put each of our names in a hat with the full agreement of the other two. We then got an impartial bystander to pull out a name.
Sure enough, Sharma’s name came out. As a joke, I said, ‘It was bound to be you, Sharma, as I put your name on all of the bits of paper!’ He grabbed the lot and dashed off to the office block. It transpired that he had gone to see his Divisional Officer to complain. Of course, when they unfolded the pieces of paper, each of our names were on them. Nevertheless, he wriggled out of going. The official excuse was that he could not eat the food on board and couldn’t even eat food cooked in their pots and pans as his religion would not permit it. 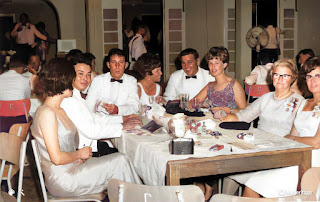 Several months later, another close friend had completed his secondment and was flying back to the UK. As was the custom, he laid on food and drinks in a room behind the bar. Jim made sure that he bought everyone who came in a drink. There was curry, rice, prawns, sandwiches etc and more than enough for all. After the farewell party had been in full swing for a while, Sharma turned up. He picked up a plate and loaded it with curry, rice and prawns. For good measure, he put a couple of sandwiches on top. He then realised that he couldn’t find a fork to eat it with as they had all been used. He turned to Jim and explained his dilemma. Jim said it was no problem and picked up his own used fork, licked it clean, gave it a quick twirl in his pint of Tiger Beer and handed it to Sharma.
‘Thanks, Chief!’ he said and immediately got stuck in. After he’d cleared his plate, I said to him that I thought that he wasn’t allowed to eat the same food or food that had been prepared in other people’s pots and pans.
‘That’s right, Chief.’ he said. ‘I’ll have to do a penance.’
‘What might that be?’ I asked.
‘I’ll have to wash three times a day for a week.’ he said.
I couldn’t think of an answer to that. Nevertheless, I’ve always wondered how many times a day he washed normally. 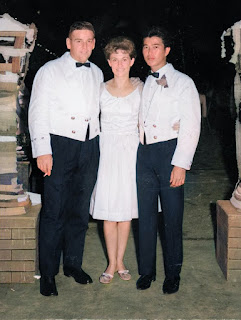 Poon was a terrific bloke. His English was excellent although a lot of it had been learned on RN ships. As a result, he thought that some swear words were normal language. These could pop out at any time and embarrass any ladies that were around. He could speak English, Mandarin, Chinese, Hokkien Chinese and Malayan. I used to ask him what language he thought in, as he could switch from one language to another effortlessly. We came into contact with each other a lot. I knew him as a work colleague and a friend with a ready sense of humour. I remember one day when we were working at Tanjong Rhu dockyard in Singapore calling into his home. The main room as you
went in was dominated by a shrine to his ancestors. It looked very oriental with joss sticks burning. The floors were stone and many of his family slept in the same room. Their beds were simple canvas directly on to the floor. Nice and cool but pretty hard!
He came to visit us after we came back to the UK. He was standing by a ship being built in France and managed to get across. We wrote to each other for several years but eventually lost touch. I'd love to find out what happened to him. Poon was a nickname - he got called Albert Poon after a well-known Chinese racing driver. His real name sounded very Chinese but in subsequent moves, we lost his address.'
Posted by derek tait at 10:02