I was very interested to read James Seah's blog post today about what became of the New 7th Storey Hotel. I know that many people stayed there in the 1960s on arrival in Singapore and again when they were due to leave. Reading James's blog made me look for an old leaflet that I had from the hotel from 1990. We'd travelled around Australia for 6 months and wrote to several hotels in Singapore, from Sydney, to see if they had any accommodation. The New 7th Storey Hotel was the only one kind enough to write back and book us in by mail. When we got a taxi from the airport to the hotel, the driver said, 'No good! Very old!' We'd stayed in worse places backpacking around Australia so we weren't too bothered. 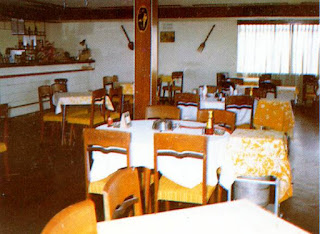 The hotel had obviously seen better days and was covered in bamboo scaffold. Inside, the staff were very friendly but we seemed to be the only guests. We were shown to the lift which had a metal gate type elevator which was operated by a very old man. This seemed to be his only job, to see people up and down, and he looked like he'd been there forever. The room was very sparse with two beds and a ceiling fan. I think that I've said before that they'd left one pair of 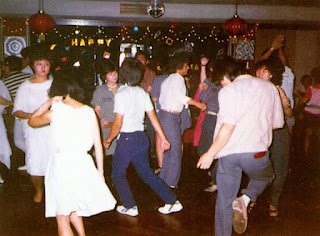 flip-flops out for us but each was for a different size foot! They let us have a plastic cereal bowl, which looked like it had been kicked around since 1960, and a spoon. We'd travelled so far that we had a sleep and when we woke up the next day, there were cockroaches in the bowl so we decided not to eat our own cereal in the room. I'd picked up a leaflet at the reception which showed the restaurant on the 7th floor and it looked fine so we went up there for breakfast. There wasn't another soul about but the views were great. There was a language barrier but we eventually ended up with some toast and cereal, which seemed to take forever, which was strange as we were the only guests. I always remember that the toast tasted of sugar, for some reason. The staff were nice enough but it wasn't the best place in the world to stay and after a couple of days we said goodbye to the cockroaches and moved to the YMCA on Orchard Road, which is the best YMCA I've ever stayed in. The leaflet for the New 7th Storey Hotel reads (word for word): While fast-changing Singapore develops as a modern cross roads and port of south east Asia, it's good to know that certain things are still in existence and changes made into a new Singapore.
New 7th Storey Hotel is centrally located amidst bustling busy shop-houses, one of the few remaining fore days of Singapore milestone.
Each of the hotel 38 rooms have been refurbished spacious and safety, add with a homely touch, has a colour television and direct telephone facility, with individual air-conditioning control unit and wall to wall carpeting.
Restaurant and Bar on the 7th floor provides magnificent views of the harbour and city areas, serves Western and Eastern Ala Carte Menu and breakfast in the morning.
I've scanned some photos from the leaflet and although the leaflet is from 1990, I think the photos were from the 1970s. We never saw this many people when we were there. Reading James's blog, it's all now disappeared which seems a shame because even though it was run down it was still a reminder of the old Singapore and how it all once looked.
Posted by derek tait at 08:28