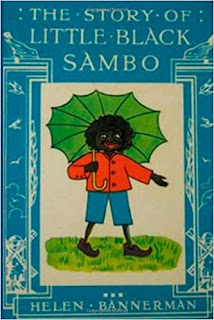 The Little Black Sambo was the first book that I ever read while attending the Royal Naval infant school at Kebunteh in Johore Bahru in 1965. I loved the book, especially its very colourful illustrations. It told the story of a small boy whose colourful new clothes, shoes, and umbrella are taken by four tigers in exchange for them not eating him. The tigers get jealous of one another and chase each other around a tree until they turn into butter. The boy collects his clothes and takes the butter home to his mother who then makes pancakes out of it. As a small boy, I believed that this could happen and there were quite possibly tigers in the jungle further up the street!
I would love to have a copy of this book but haven't seen one since the 1960s although I know it's regularly sold on ebay. The story was written by Helen Bannerman and published in 1899.
Over the years, the book and its title have been seen to have been racist and it has been rewritten and released with such titles as 'The Boy and the Tigers', 'The Story of Little Babaji', 'Sam and the Tigers' and 'Little Kim'. However, it has been republished many times with its original title and seems to be sold all over the internet and is still available on Amazon and other bookshops.
Of course, when I was a boy, I didn't realise it could be taken as being racist. I didn't even know what racism was. We were surrounded by people of all nationalities and we all got on pretty well. To me, it was just a lovely colourful book with characters I could imagine living not too far away from where I lived.
Posted by derek tait at 12:46