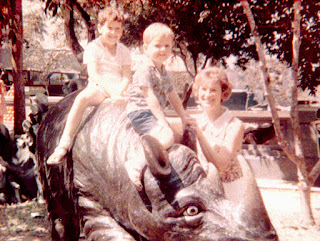 I love this photo taken at Tiger Balm Gardens which shows my brother, Alan, me and our mum. I look very little so I suppose the photo was probably taken in 1965 when I would have been 4 years old. All I remember about the day was that it was quite a job for me getting on that rhinocerous! My dad had probably quickly put me on its back before taking the picture with our Kodak 127 Brownie. I remember that there were signs everywhere, in both English and Chinese, asking people to keep off the exhibits. I don't think that anyone ever took any notice though!
Last time, I was at the gardens in 1990, there was no sign of the rhino and the gorilla at the main gate had also disappeared. I know that the gorilla has been re-instated, with his fierce pointed teeth filed down, but I wonder if the rhino ever made a reappearance?
Posted by derek tait at 13:58