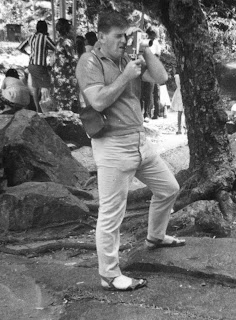 All of these photos were taken at Kota Tinggi Waterfalls which was near our home at Johore Bahru. The waterfalls were a great tourist attraction and were located a few miles north-west of the village of Kota Tinggi at a place called Lombong. The water drained off a mountain called Gunung Muntahak to a series of shallow pools. There used to be lots of people swimming in them and it was a fond haunt of sericemen and their families as well as many of the locals. I've heard that today, it's a bit spoilt by development of nearby resorts which seems a shame. I suppose though, that most of the places we remember fondly when we were kids in Singapore and Malaya have now long gone and hotels, supermarkets, housing and leisure complexes have taken their place. The first photo shows my dad, complete with cine camera, my mum and me. I remember my dad filming but none of the footage seems to have survived. I think that I remember seeing it when it was originally shot and there were scenes of people bathing in the pools. The film probably got 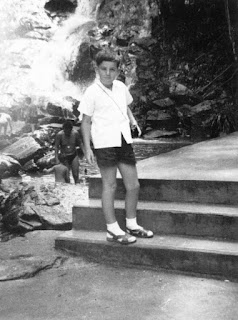 mangled in the temperamental cine projectors of the day and was probably, unfortunately, thrown away. The second photo shows my brother, Alan, with our Kodak Brownie 127 camera that my grandad had bought my parents a few years before we left. We must have had two cameras at the time though I don't remember the other one. In the background can be seen families paddling in the nearby pools. The third photo shows me with the waterfalls in the background. I don't look too happy in this photo but I can't remember why! Maybe it was because Alan had the camera and was taking all the pictures! 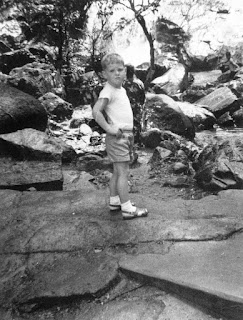 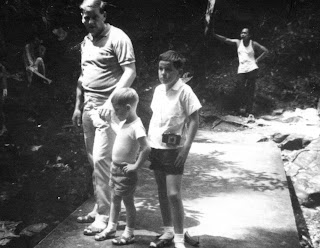 The last photo shows my dad, me and Alan. In the background is a local man, probably wondering what all the crazy foreigners will get up to next! He was probably selling drinks to all the visitors. I notice that we all have sandals on as well as socks. The socks were probably to keep the mozzies off our ankles, there would have certainly been plenty of them ready to bite near all that water!
Posted by derek tait at 10:54