Eating out in Singapore in the 1960s

When I was putting together my book More Memories of Singapore and Malaya several years ago, my father recalled eating out in Singapore in the 1960s:

'One of the pleasant benefits of the upheaval of moving to Singapore was being able to eat out more. There was a huge variety of foods from all corners of the world - Malaysian, Singaporean, Thai, Indian, Chinese, French and even English if you were hard up. Nowadays, all of these different dishes are fairly commonplace but I doubt that any of them have the original flavours and spices that you found in Singapore and Johore Bahru. Our favourite eating place had to be George's Steak House in 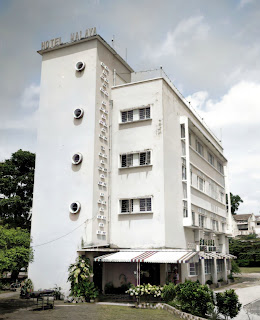 Johore Bahru. During our time there, I must have worked my way through the whole menu! There were no steaks that I didn't try including fillet mignon, chateaubriand, fillet steak and carpetbaggers to mention a few. Then there was Lobster Thermidor, sweet and sour prawns and sweet and sour pork. We tried many times to get the sweet and sour recipes without success. I suspect they simply didn't understand us. Their curries were terrific and the curry on a Sunday lunchtime was out of this world. After being up at the Mess to the open-air cinema, we would call in for a barbecue outside the hotel in the garden. It seemed like everything it was possible to barbecue ended up on your plate. The only problem with the barbecue is while you enjoyed your food, the mozzies made a meal of you! Of course, all of these meals had to be washed down with copious amounts of Tiger Beer! The ladies seemed to prefer a Tom or a John Collins. Well, in such a warm climate, you had to make sure that you didn't get dehydrated! 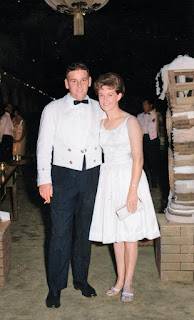 The food everywhere had to be tasted to be believed. As always, Chinese food was always a front runner. Chinese New Year was celebrated in the Senior Rates Mess. Apart from the usual band, dance, raffle and so on, there was a ten-course meal. It sounds far too much to eat but over the evening, with frequent intervals for dancing or simply talking and joking, it was surprising how much you ate. I remember that three of the courses were different soups. One was bird's nest soup. I didn't like the look of it and didn't try it. The second was shark's fin soup. Again, I was a coward. The third was chicken soup. I've never been a fan of chicken soup but this one was really nice. Each soup was served in a tureen with a ladle and we helped ourselves. Everyone was enjoying it until a friend dug deep with the ladle and came up with a chicken foot!
Food stalls cropped up everywhere in the city. The tables and chairs were very basic and placed on the sidewalk or anywhere convenient. After making your choice, the food would be cooked adjacent to your table with flames and smells erupting from the fires and pans. I don't remember having anything I didn't like.
In town for the night, the ladies usually had a Singapore Sling - a mixture of gin, cherry brandy, cointreau and soda. A lethal mix! The main bar was run by Lingha. He was a friendly bloke, Chinese and very well made. He usually wore shorts that were very large and flapped around his legs. I'm sure that he must have been the inspiration for that Eric Morecambe sketch. He always rode a scooter. Not only did he ride his scooter to and from work, he also made 10am deliveries to all of the Malaysian Naval base. He would chug-chug in, wearing his voluminous shorts and flip flops, with many boxes perched precariously on the back. His curry puffs were 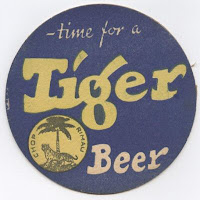 legendary. On nights when I was on duty, he would bring in my supper - usually Nasi Goreng and prawns wrapped in a banana leaf.
The prawns were huge, the Nasi Goreng delicious and the Tiger Beer wasn't bad either!'
Posted by derek tait at 13:26