My Dad's posting to Singapore in 1959 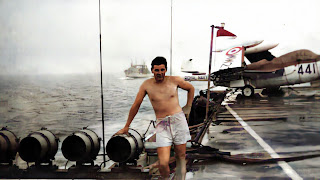 'My first visit to Singapore was in September 1959. How long ago it seems! I was 23 years old and wide open to new experiences. I arrived there on board HMS Centaur which was an aircraft carrier. The ship was commissioned on the 3rd December 1958. She was 737 feet long with a beam of 128 feet. She carried 1,637 men which included the air squadrons. Between September 1958 and April 1960, she steamed 80,916 nautical miles and used 62,000 tons of fuel oil. Aircraft landed on her deck 7805 times. I promise no more statistics! The ship sailed through the Med. After the Suez Canal, our route took in Aden, Karachi, Cochin, Trincomalee and then Singapore. The ship had got hotter and more uncomfortable as we travelled further and further eastwards. When there was no flying taking place, everyone took the slightest opportunity to get on the flight deck. The ship's movement caused a welcome breeze. Hours could be spent in the relative coolness watching all shapes and sizes of sea snakes and jellyfish drifting by. The many dolphins swimming effortlessly alongside and the flying fish skimming the surface were enthralling. Nevertheless, the heat on board was relentless, so when we were told we would be victualled in HMS Terror, during the docking period, it was a blessed relief! The ship was taken into King George V dry dock. She was an impressive spectacle high and dry in the glorious sunshine. 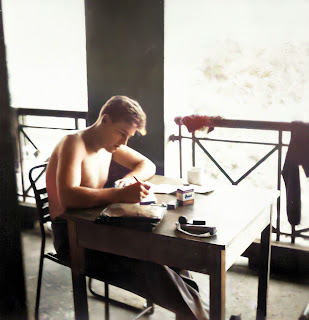 The accommodation at HMS Terror was on several levels with each level having lovely cool balconies. We spent hours there writing letters home, chatting and playing cards etc. A short walk away was a swimming pool. Tiger Beer flowed like water. After life on board, this was just about paradise. Sembawang Village was close by with its duty free shops and bars. Cameras, watches, binoculars and all the usual was on offer at good prices. However, we were more fascinated with the toy shops. There were toys for sale that you couldn't find in the UK. We would have a good look at them all and soon the floor of the shop would be covered in toys, all battery operated including aeroplanes, robots, telephones and all sorts of gadgets. While we made our selections, we would be given a glass of Tiger Beer. The shopkeepers knew how to keep a customer happy. As with all of the local people, they were very polite, courteous and friendly. After a bit of bartering, our presents were wrapped up and ready for the kids back home. Our visits to Singapore City itself were limited. We did have to work sometimes and our pay in those days was pretty poor. Nevertheless, Tiger Balm Gardens was a must to visit. The other attraction in town was the Britannia Club which was solely for service personnel. It had a magnificent swimming pool and restaurants and was situated across the road from the famous Raffles Hotel. We spent many a happy hour looking around the town and then relaxing in the club. I recall taking a ride in a trishaw. A car clipped the side of it and we were dumped unceremoniously into the road as it tipped over. All the locals seemed to find it hilarious and it was just as well that nobody was hurt. The trishaw was a bit bent and, to rub salt into the wounds, the driver expected a tip! The aircraft squadrons had flown ashore before we docked and spent time at RAF Seletar and RAF Butterworth. Any rest and relaxation they got was well earned as their working days were filled with danger. We lost several helicopters and planes during the commission and sadly, some of the pilots. A ship of this size was like a small village and any tragedy touched us all. 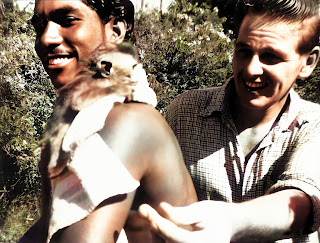 On the 3rd October, we spent a weekend at Pulau Tioman which is situated off the east coast of Malaysia. It was my idea of a perfect tropical island with golden sands bleached by the sun and crystal clear blue water. It was completely uninhabited or so it seemed. We were landed by one of the ships' boats. The palm trees bent out towards the sea at such an angle that you could almost walk up the trunks. One of the sailors climbed up and started trying to knock down the coconuts. At this point, a native came out of the jungle and shouted,' Hey Jack! Leave my bloody coconuts alone!' He came from a tin hut which was just behind the tree line. All around the hut were the rotting husks of coconuts. He had an ample supply of coca-cola which he sold to anyone interested. I cannot imagine who he would sell to normally as we never saw another soul all of the time we were there. We had a wonderful day. I had flippers, mask and a spear gun. The waters were alive with fish of every colour and shape and the coral was spectacular. I caught several crayfish. 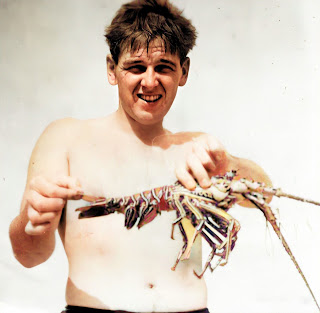 Back on board, at night, we bribed the chief chef with a tot of rum to cook them for us. They were
delicious with a can or two of ice cold beer. The ship sailed on from there to Hong Kong, Japan and all of the major ports of Australia. We returned to Singapore in 1960 but not without mishap. We came alongside too quickly and crunched the dockyard wall and smashed a lamppost. The port anchor was huge and the shock of the impact shook it free. It landed on the jetty with a terrific thump. I needed a haircut while we were in the harbour and there was a barber's shop in HMS Terror. I found out when I arrived that the barber was in fact a young Chinese girl. In those days, there were not any female barbers, so it was a bit of a shock. Nevertheless, I was soon in the chair with her clipping away in a competent manner. The next thing I knew, she was clipping away inside my ears and before I could stop her, the scissors were up my nose! I've had trims before but never one in so many places. We left Singapore for the last time on the 4th February 1960 and finally arrived home in Plymouth on the 26th April 1960. We had been away for 3 days short of a year. I never dreamt that five years later I would return with my family and live there for three wonderful years.'
Posted by derek tait at 13:51