Happy days in Singapore and Malaya in the 1960s

When I was putting together my book Memories of Singapore and Malaya in 2007, I asked my mother to write down her memories of our time there in the 1960s. I should mention that both my father and brother are called Alan: 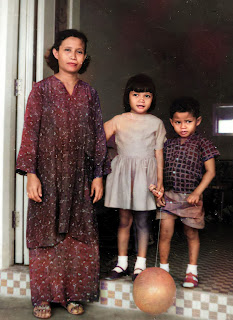 'The weather was very hot and humid most of the time. When the Monsoon season came, it was heaven! We use to stand out in the rain splashing around just to cool down. The Amah thought we were mad as she was so cold.
The first week out there, I had Alan and Derek with me and we saw what looked like a float for a carnival. It was very colourful, covered in flowers and pictures with lots of singing and chanting and dancing around. I picked Derek up to see it and took Alan's hand, and said, 'Let's watch the parade!'.
We were enjoying it until someone said, 'You're not watching a parade - it's a funeral!'
We bought a Triumph Herald car which was white with a red stripe, SP 3040, from Hong Heng's in Singapore. We kept it for the three years we were there. Before that we hired a Toyota to go to Penang, it must have been one of their first models. Alan's knees almost touched the steering wheel and it had no petrol gauge. We never knew when we were going to run out! 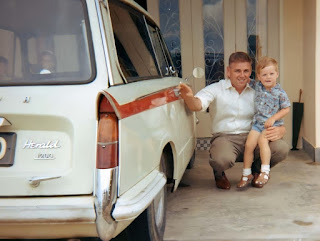 We were never burgled but this happened to a few people. We had windows, with fancy steel bars, which meant you could leave them open at night but nobody could get in. However, the burglars would get a long bamboo pole, attach a hook to the end and put it through the slats and hook trousers to take money from them! Any small items that could be hooked disappeared!
The house opposite was owned by a Mr Lee and family. He had two wives, an older one and a younger one. He asked me over one night and I met Tunka Abdul Rahman, the first prime minister of Malaysia.
We hired a TV and, when we had it on, the local children would sit on the gate and watch it through the open doors! I think that’s where we first saw Star Trek. The programmes were hilarious. A prize in a quiz show was described as, 'A lawn mower - just the thing for lawn mowing!'.
They also had talent shows but they all came out and sang the same song, 'I went to your wedding', which was popular at the time but we grew to hate it! On another night they would all sing, 'Fly me to the Moon' and we were wishing they would, they were terrible! 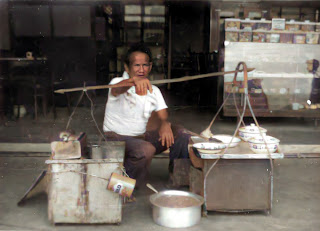 Alan would spend his pocket money on Satay sticks from a Malaya man who made them on two biscuit tins filled with hot charcoal. He carried them across his shoulders on a long pole!
We would sometimes get a taxi from JB to Singapore, it only cost a dollar, which was two shillings and four pence, in English money. It was very cheap and we travelled in a Mercedes. We'd go to Orchard Road and visit the cold store at Robinsons, just to cool down. Next, we'd visit The House Of Tang, an oriental Aladdin's Cave. It was full of camphor wood chests, carvings and all sorts of things you'd never see in England at the time. We still have a Bali wooden figure that we bought there. 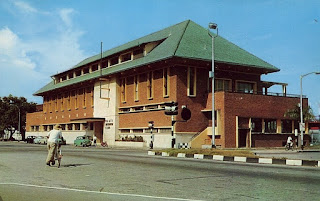 We often used the Brit Club. We'd all meet up there and enjoy the facilities. It was opposite Raffles Hotel, famous for it's gin-slings and also for the famous people who went there. Not that we ever ate in there, it was too expensive! Only the famous could afford the prices! Instead, we would have a swim at the Brit Club and they served meals as well, what a lazy and enjoyable life it was!
Change Alley in Singapore was a great place for bargains. You could barter all day and still get seen off! It was still cheaper than at home and that was all part of the fun. The Amah’s Markets were great as well. We use to go to one up the Bukit Timah Road, they were very colourful at night and the lights attracted huge moths. I bought two round green chairs there for the equivalent of 5 shillings each at English prices. We brought them home and we had them for years, they lasted well. 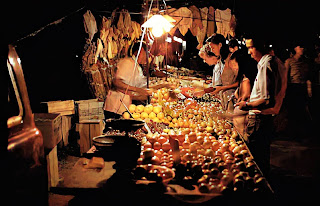 Once through the Naval Gate, we came to Sembawang with its small interesting shops. They would make a dress the same day for $2.50, about 6 shillings in English money. They would also make the kids' sandals for school. It was also the cheapest place to have suits made. In the evenings, the outside would change and eating stalls would be set up, Nasi Goreng was our favourite! 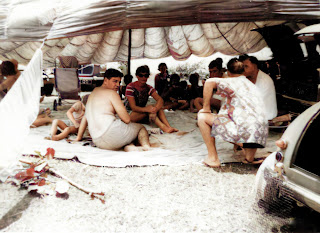 One of our favourite trips out was at the weekends. Les Sharp, who was a diver, had the use of a boat and a crowd of us would go on a banyan to a deserted beach, taking barbeque stuff with us. We had an old parachute that we managed to drape around for shade. We had a go at water skiing which was great until you had to let go then you thought of all the 'nasties' lurking beneath and wished the boat would hurry back!
I still remember the awful smell of the Durian fruit, it was supposed to taste great but the smell put us off! All of Jalan Ah Fook didn't smell very sweet. I think it was partly to do with the market there and the heat. We named it 'Sweet Water Canal'! At night, outside the market and all the way along Jalan Ah Fook, the shopkeepers just opened up their canvas beds and slept outside their shops. They
didn't seem to suffer from insect bites like the rest of us. I think they had them trained to just bite the foreigners!
We had three wonderful years there. We could have stayed longer but wanted to get back. As soon as we were hit by bad weather and icy cold wind when we returned, we all just wanted to go back!'