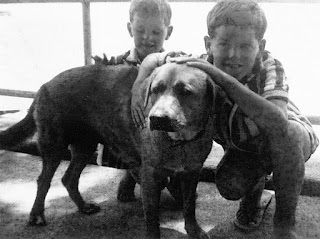 Here's a photo of me and my brother at Sandycroft, Penang in about 1966. There was a lovely dog there that used to follow us everywhere and I think he must have belonged to someone who worked in the cafe. If my memory serves me right, his name was Pepper and I think he was a Labrador (or something similar!). Back at home in Jalan Wijaya, there were many wild dogs roaming around. I quite liked seeing them and sometimes we'd play with them, although we were told to keep away from them in case they had rabies. Many servicemen and their children had dogs but when they came to return home, the dog had to either be found a new home or, unfortunately, be put down. I remember a few people who had dogs near to our home and I think someone even had a couple of poodles, which weren't the sort of dog you would expect to find in the Far East. Most of the wild dogs on the estate were just a mixture of everything and most were quite friendly though they'd bark like most dogs! I remember one day when Alan came in and said that he had seen the police driving around and shooting stray dogs. It was very upsetting but they did this often though I never witnessed it. There's one time that I really remember coming into contact with a stray dog and this follows on from my last post. I think I was at Debbie Sharpe's birthday party near to our home. I was about 5 at the time. I was jumping around the garden, pretending to be a kangaroo, when I cracked my head on one of the steel windows that was open. Now, it's funny when you're in pain, you remember anything that happened to you at the time,even years later. I remember that Englebert Humperdinck's 'Please Release Me' was playing on the radio! Anyway, I decided to walk home with my hand on my head and blood pouring down my arm. As I made my way up the street, Bette, Debbie's mother, had seen what had happened and called me back. I was determined to get home and was probably tearful. As I came around the corner into Jalan Wijaya, a huge friendly, wild dog came up to me, wagging its tail, and stood on my shoulders and licked my face. After all the warnings about wild dogs, I think I then ran home as quick as I could. I had a sore head for a while but all was soon back to normal. As I said earlier, I've still got the scar and my hair never did grow there again! Whenever I hear 'Please Release Me', I'm taken back to that day in Johore Bahru, my sore head and that scary dog!