Oxen on the beach 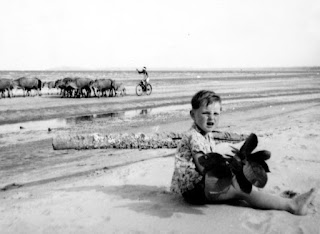 Here's a photo of me in about 1966. I think it was taken on Jason's Bay in Malaya. In the background is a man on a bicycle hearding oxen. To this day, I remember the smell and it's a smell I've not come across since! My face, I think, gives it away! We used to visit Jason's Bay often. It was close to home for any of the service men who lived at Johore Bahru. There were regular banyans and barbeques and the kids would enjoy playing on a lilo (do they still have them?) or swimming in the sea. There must have been allsorts of dangerous creatures swimming around out there but I don't remember seeing any of them. I wouldn't be surprised if there was an occasional shark. There were certainly jellyfish though we all seemed to survive unscathed! This photo reminded me of all the smells that you used to get in Singapore and Malaya. I remember the smell when catching a bus. There would be live chickens running around, this is what they called 'fresh' in those days, and fish wrapped in newspaper on the floor. Singapore itself had a smell all of its own. I think that the canal running through the city had just about everything floating in it! Of course, the river was a much busier place then, full of people and sampans. The market stalls with their fruit, vegetables and meat all added to the smell and any rubbish just seemed to end up in the river. Of course, it's all very clean nowadays. When I went back in 1990, the streets were spotless. There were fines for eating on the MRT, dropping litter and even for not flushing the toilet! All very different from the Singapore of the 1960s. I still miss it though. I wonder what Jason's Bay is like today and if there are still Oxen taken across the beach?