When I was a kid growing up in Singapore and Malaya, there was one thing that I loved - robots! My favourite cartoons were Marine Boy, which I'm sure everyone remembers, and Gigantor. Set in the year 2000, the cartoon features Jimmy Sparks, a 12-year-old boy, who controls Gigantor, a huge flying robot. When I wasn't playing Samurai, or pretending to be the characters from Time Tunnel, I was pretending to be Gigantor. I watched the show when I was three years old but apparently it had to be edited to take out the violence when it was shown in America. Like Marine Boy, it was made in Japan and dubbed into English. I've not seen the cartoon since the 1960s but here's a photo from the show. 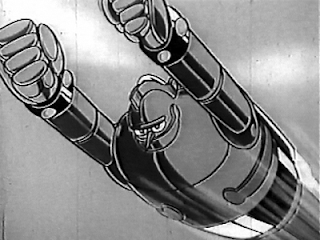 I think that's what started my fascination with tin robots. I had two - a talking one and one that showed a space scene in a television in its chest. Alan had a walking tin robot that would stop and fire guns! We used to have battles in our bedroom with them. Alan's lasted until we got back to England when he dismantled it and found that it was made from tin from old Coca-Cola cans and other re-used metal. They never wasted anything in Singapore! My robots lasted until the 1980s when, unfortunately, they were thrown away. They'd be worth hundreds of pounds nowadays and are very collectable. As I mentioned Marine Boy earlier, here's a clip from the show, I hope it brings back memories.
Gigantor was colorised and released on DVD, though I haven't seen any of the episodes. I wonder how many other people reading this remember the show?
Posted by derek tait at 09:20